This document describes the use of the WebSocket transport.

Other sections can be accessed from the Overview.

The NMOS Events & Tally community has shown interest in using the WebSocket protocol as a transport for events and tally information as it is a familiar protocol which has already been used in the NMOS ecosystem. There is an ongoing debate about WebSocket topologies being less efficient than broker based transport topologies like MQTT in a large-scale system because each sending device needs to host its own server to cope with demand. One of the cases we have identified which could be improved is when a device hosts multiple receivers which are interested in multiple senders on another device. In a simple receiver to sender connection mapping a connection would be required from each receiver to each sender. This could be improved with a device subscriptions model whereby you would only have a single connection between the devices with a subscriptions list. 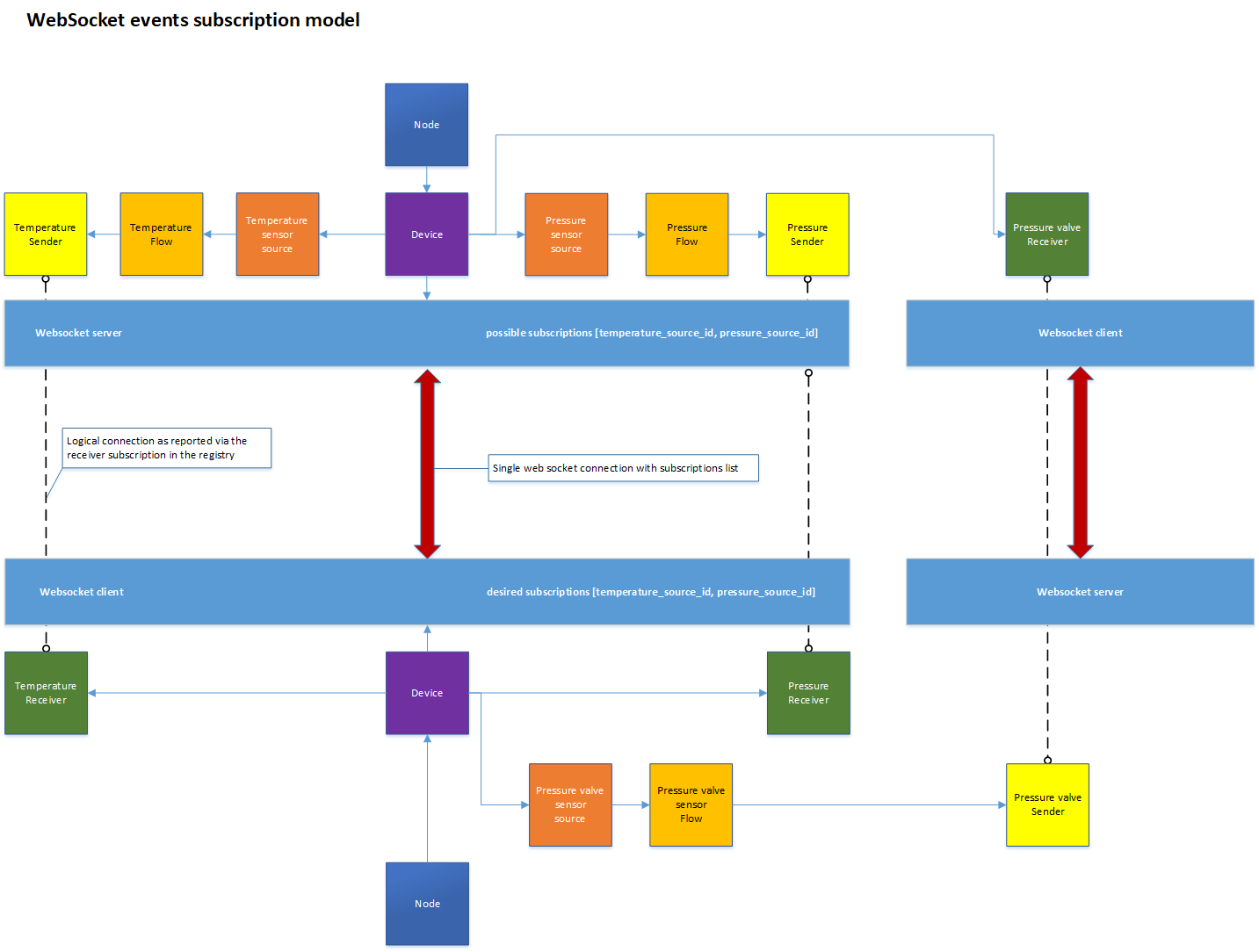 With that in mind, going forward you will see concepts such as server and client which represent the senders’ collection and the interested receivers’ collection. Furthermore, even though there will only be a single WebSocket URL for the sender, each client will have its own two-way communication channel (WebSocket connection) with the server with unique subscriptions.

NMOS resources using WebSocket will use the urn:x-nmos:transport:websocket transport.

The connection_authorization parameter is a boolean value which indicates whether authorization is used for communication with the WebSocket server. As specified in IS-05:

For senders and receivers that do not support both modes, the IS-05 constraints should list the supported value in an ‘enum’ for this parameter.

The use of “auto” is not defined for this parameter.

The ext_is_07_source_id transport parameter represents the source id which is the emitter of the event. This is required for the WebSocket client to be able to build the subscriptions required from the server. Furthermore, the source id is required to filter and help the client determine which of the connected receivers needs to be notified when an event is consumed.

The use of “auto” is not defined for this parameter.

Example of IS-05 PATCH request on a receiver:

There is no mandated URL base path for servers to use for connection_uri. The value above, /x-nmos/events/v1.0/devices/{deviceId}, is an example.

Upon connection, a client needs to initialise its subscriptions list by sending a subscription command on the WebSocket connection.

A subscription command is only sent as a consequence of an NMOS Connection Management action or a reconnection.

Upon connection, the client is required to report its health every 5 seconds in order to maintain its connection and subscription. This is similar to the behaviour required by the registry for nodes in IS-04 specification. Every health command should be followed by a health response (see Message types).

The client submits its initial or updated subscriptions list including the ext_is_07_source_id, by sending a subscription command.

The client receives the initial state for each source in its subscriptions list thus solving the problem of late joiners.

The client continues to receive events only from the subscribed sources.

The client issues health commands every 5 seconds as described above.

As described above a client will receive the initial states for all the sources in its subscriptions list.

A client may also choose to query the Events API using ext_is_07_rest_api_url to access the latest state of an emitter in order to verify the current state.