In some deployments, multiple copies of essence (video/audio/data) are sent via redundant paths in order to provide guarantees about availability. In these situations, it is likely that a single Node will be used at the point of content creation and transmission via the two paths, and again a single Node used for reception from the two paths.

One way NMOS can model this is as a single Flow sent via two independent Senders which are assigned to separate physical network interfaces on a Node.

Resilient operation via redundancy is also applicable to the NMOS APIs and both peer-to-peer and registered discovery. Registered discovery MAY use either a single registry, or an independent registry for each network.

In order to support this mode and ensure persistence in the registry upon link failure, a Node operating in this mode MAY register with Registration APIs (and host its Node API) via multiple independent network interfaces.

Clients are encouraged to use the api attribute rather than the deprecated href attribute when accessing a Node API (see Node API /self resource) as the href attribute is likely to target a single network interface only. Nodes which need to support this mode of operation at v1.0 MUST register a different href for the same Node id with each registry, even though this is a workaround which technically breaches data model constraints. 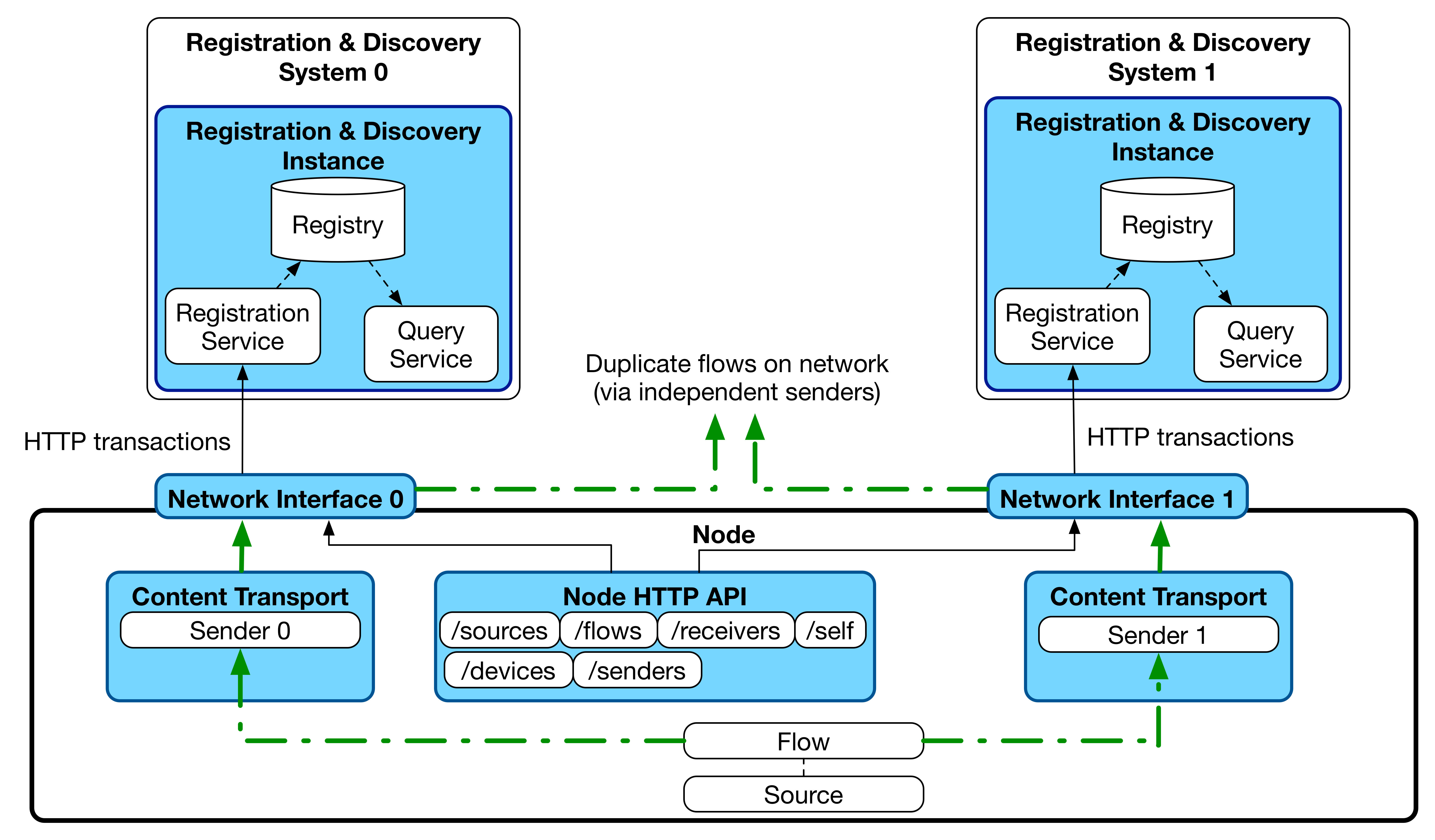 Nodes SHOULD perform a heartbeat every 5 seconds by default, by making HTTP POST requests to the /health/nodes/{nodeId} endpoint.

Registration APIs SHOULD use a garbage collection interval of 12 seconds by default (triggered just after two failed heartbeats at the default 5 second interval).

Nodes only need perform a heartbeat to maintain their Node resource in the Registration API. If heartbeats fail over a period greater than the garbage collection interval, both the Node and all registered sub-resources SHOULD be removed from the registry automatically.

In order to permit garbage collection, resources MUST only be accepted by a Registration API where the registry already has a record of the corresponding parent resource.

A Node SHOULD register resources in the following order to avoid rejections due to referential integrity issues:

* Version v1.0 Flows do not have a device_id and SHOULD be garbage collected based on their parent source_id.

Nodes SHOULD attempt to remove themselves from the registry cleanly on shutdown. This requires HTTP DELETE requests to be made for each resource registered via the Registration API. These DELETEs SHOULD be carried out on child resources followed by their parents (e.g. Sources which have child Flows are deleted after their children etc.)

Following deletion of all other resources, the Node resource MAY be deleted and heartbeating stopped.

It is expected that some types of Node will be unable to unregister themselves in a clean manner, particularly in cases where a network cable is unplugged. In order to prevent stale resources remaining in the registry, a garbage collection procedure as specified in the ‘Heartbeating’ section above SHOULD be employed by registry implementers.

If a network cable is temporarily unplugged, dependent on the time for which it remains unplugged and the settings used by the registry, the Node might or might not remain registered. When the Node comes back onto the network it SHOULD proceed as described in the ‘Error Conditions’ section below covering an inability to connect and timeouts.

If a Node is restarted, its first action upon discovering a Registration API is to register its Node resource. On first registration with a Registration API this SHOULD result in a 201 (Created) HTTP response code. If a Node receives a 200 (OK) code in this case, a previous record of the Node can be assumed to still exist within the network registry. In order to avoid the registry-held representation of the Node’s resources from being out of sync with the Node’s view, an HTTP DELETE SHOULD be performed in this situation to explicitly clear the registry of the Node and any sub-resources. A new Node registration after this point SHOULD result in the correct 201 (Created) response code.

Node Encounters HTTP 400 (Or Other Undocumented 4xx) On Registration

A 400 (Bad Request) error indicates a client error which is likely to be the result of a validation failure identified by the Registration API. The same request MUST NOT be re-attempted without corrective action being taken first.

A registry MAY issue a 400 (Bad Request) code from the /resource POST endpoint for various reasons, including the following cases. It is not expected that a Node will be able to automatically handle these errors and user intervention could be necessary.

Error responses as detailed in the APIs documentation can assist with debugging these issues.

A 409 (Conflict) error indicates that the Node has attempted to register or heartbeat with a registry which it is already registered with using a different API version. The Node MUST fully unregister from this registry using its registered API version before proceeding to re-register at the new API version. For more information on supporting multiple versions, see the Upgrade Path.

A 500 (Internal Server Error) error, inability to connect or a timeout indicates a server side or connectivity issue. As this issue could affect just one Registration API in a cluster, it is advised that clients identify another Registration API to use from their discovered list. The first interaction with a new Registration API in this case SHOULD be a heartbeat to confirm whether the Node is still present in the registry.

When performing the initial heartbeat with a new Registration API, a 200 (OK) code indicates that the Node and its resources are still present in the registry cluster and no further action is necessary. Future registrations and heartbeats SHOULD be performed against this new Registration API. If a 404 (Not Found) code is encountered when performing this heartbeat, refer to ‘Node Encounters HTTP 404 On Heartbeat’ above.

Note that in order to achieve efficient failover from one Registration API to another, the Node needs to perform its first heartbeat with the new Registration API within the garbage collection interval following its most recent successful heartbeat. It is therefore advised that Nodes use the heartbeat interval to define their connection timeouts for /health/nodes/{nodeId} POST requests.

If a 5xx error is encountered when interacting with all discoverable Registration APIs, clients SHOULD implement an exponential backoff algorithm in their next attempts until a non-5xx response code is received.